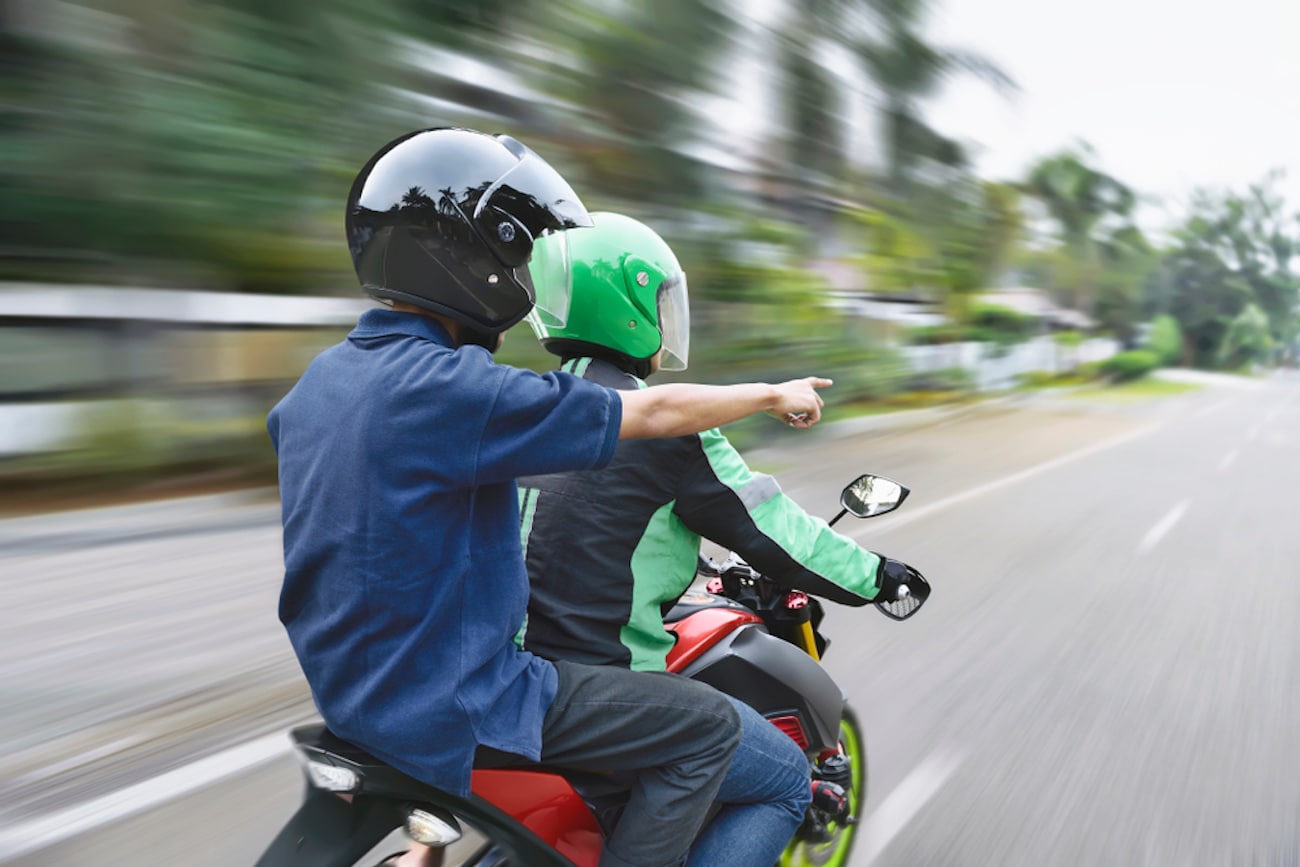 But whether you already ride or not, it takes some attention and care to become a good passenger who works as one with the rider. These seven rules will help show you the basics of riding as a passenger, from the gear you need to what you need to be aware of before getting on the bike.

When you hop on the back of someone’s bike, you probably know that you’re putting your life into their hands, but remember that the relationship cuts both ways. A two-person ride is a collaborative effort, and you’re going to be doing some learning, adjusting and communicating along the way.

If you’re riding with someone you haven’t ridden with before, you’ll want to do a thorough check-in with them first. First, make sure that the rider is experienced and credentialed enough to carry a passenger safely: Obviously, the bike will also be a crucial element of your ride, so get to know it like an old friend:

Remember that there can be huge differences between one bike and another, so don’t assume that knowing how to ride translates into knowing a particular bike. Above all, remember that there’s absolutely no such thing as a stupid question when it comes to bike safety.

Generally, you don’t want your first ride with someone else to be a cross-country trek. Long motorcycle trips require a lot of trust and a well-developed rapport between rider and passenger—things that take time to develop. So start off with some shorter, lower-commitment rides. For the very first ride, it’s a good idea to circle around a parking lot a few times to make sure both parties have the hang of it before you get on the road. Out to lunch and back is a good first trip. Gradually work your way up to longer trips, like a weekend excursion to a nearby city, to see if you’re comfortable with them. If you love to look at the scenery, a trip to a national park can be an excellent choice for your first big trek.

Group rides can be tons of fun, but again, they’re not ideal for your first few times riding as a passenger. Riding in a group means taking everyone’s preferences into account, and when you’re an inexperienced passenger, it can mean that you and your rider may need to stop more often to make adjustments. Ideally, you and the rider should be comfortable working as a unit before taking part in group rides together.

3. Be ready for curves and braking.

Braking and going through curves are the two things most likely to scare people new to riding as a motorcycle passenger. They’re not actually that hard to deal with—but you’ve gotta know how to do it safely.

Curves can seem terrifying, especially if you haven’t ridden a motorcycle before. The bike can dip startlingly close to the ground, and your initial instinct might be to either stay sitting as straight up as possible or to lean hard into the curve with the rider. Neither of these is correct. You should lean naturally into the curve with the bike, looking over the rider’s leaning shoulder as you do so. This is a skill that’s good to practice in a parking lot before getting on the road. Braking is another area that can be scary for a new passenger, so just remember that it’s okay if you get pushed into the rider a bit when braking. The rider should know that riding with a passenger requires longer and smoother application of the brakes, and that they’ll have to bear some of the brunt if they decelerate suddenly.

Finally, another important tip: Do not put your feet down at any point unless the rider tells you that you can. The rider shouldn’t need your help to steady the bike when stopped, so don’t drop your feet unless you’re asked to. The sudden shift in weight distribution can be a dangerous surprise for the rider.

You need every bit as much protection to ride a motorcycle as a passenger as you do to pilot the bike, since anything that happens to the rider can happen to the passenger. That protection should include: “All that glitters is not gold” should be your motto when shopping for gear. Motorcycle fashion is a popular style, and just because a jacket is styled like a biker’s jacket doesn’t mean that it offers the protection of a real one. If you’re new, take a more experienced rider with you when you shop for gear to help separate the wheat from the chaff.

5. Remember that comfort is life—literally.

A bike that you’re not comfortable on is a bike that’s not safe for you as a passenger. If you’re constantly having to shift position or adjust yourself, it can quickly turn into an unsafe situation.

The seat is the center of your comfort, so make sure you can ride on it without having to reposition yourself frequently. Seats come in many different styles, from relatively luxurious models with back and arm rests (more common on big-bodied touring bikes) to bare-bones styles that may not even have a backrest at all (more common on sport bikes.) A seat with insufficient back support can even cause you to slide off the bike during a sudden acceleration if you’re not careful.

It’s also possible that a seat that’s comfortable for a short ride isn’t good for a longer one—another reason to start with small trips and work your way up. Likewise, don’t settle for gear that isn’t as comfortable as you’d like, especially for a long ride. You don’t want to be a few hours into a road trip and discover that your new jacket really isn’t as comfortable as you thought. Usually, the long haul isn’t the best way to test new gear, so bring something that’s tried and true.

Try to maintain your mind in a calm state while you’re riding. You want to avoid sudden movements as much as possible, particularly when riding at speed. If you’re brand new to riding, it will probably take some time to get used to it, so remember that you’ll get more relaxed as you ride more (which is another good reason to make your first rides short ones).

In general, your muscles should be relaxed when you’re sitting on the bike, since sitting in a state of tension can make you more prone to overreact to physical stimuli. This also means exercising self-control when you’re riding as a passenger. You don’t want to flinch or jump when a bug or a rock hits your helmet—and those things can happen from time to time–so understand that they come with the territory and be prepared for them.

7. Establish a way to communicate.

On anything other than a neighborhood ride, it’s unlikely you’ll be able to verbally communicate with the rider using just your voice. Thus, you need a communications system of some kind.

The classic way for passengers and riders to communicate is through a system of shoulder taps. Every rider-passenger team has a slightly different system, but a common one is the three-tap system: once to ask to slow down, two to ask to stop when possible and three to ask to stop immediately. If you and your rider are planning on using signals like these, go over them several times beforehand until you’re sure that you’re both on the same page.

However, the easier and safer way to do it is by using a motorcycle communication system. These tiny gadgets clip onto your helmets and use digital communication technologies to let you effortlessly talk to each other. Some models, like the Cardo Freecom series, use tried-and-tested Bluetooth technology, while others, like the Cardo PackTalk series, are built with cutting-edge Dynamic Mesh Communication (DMC). All of our models feature voice command operations that make them easy to operate without a dangerous distraction.

Passenger riding is way more comfortable, more fun and more entertaining with an intercom. When you’re not talking to each other, you can easily stream music, listen to the radio or even answer a quick phone call. These intercom systems are also a big help for group rides, since they can help everyone coordinate and stay together without the need for hand signals.

Whether or not you ride yourself, riding on a motorcycle as a passenger is a thrilling, fun and rewarding experience. Remember to take it slow, communicate, ask all the questions you need and don’t get out on the road unless you feel comfortable. Once you start, the thrills don’t stop!