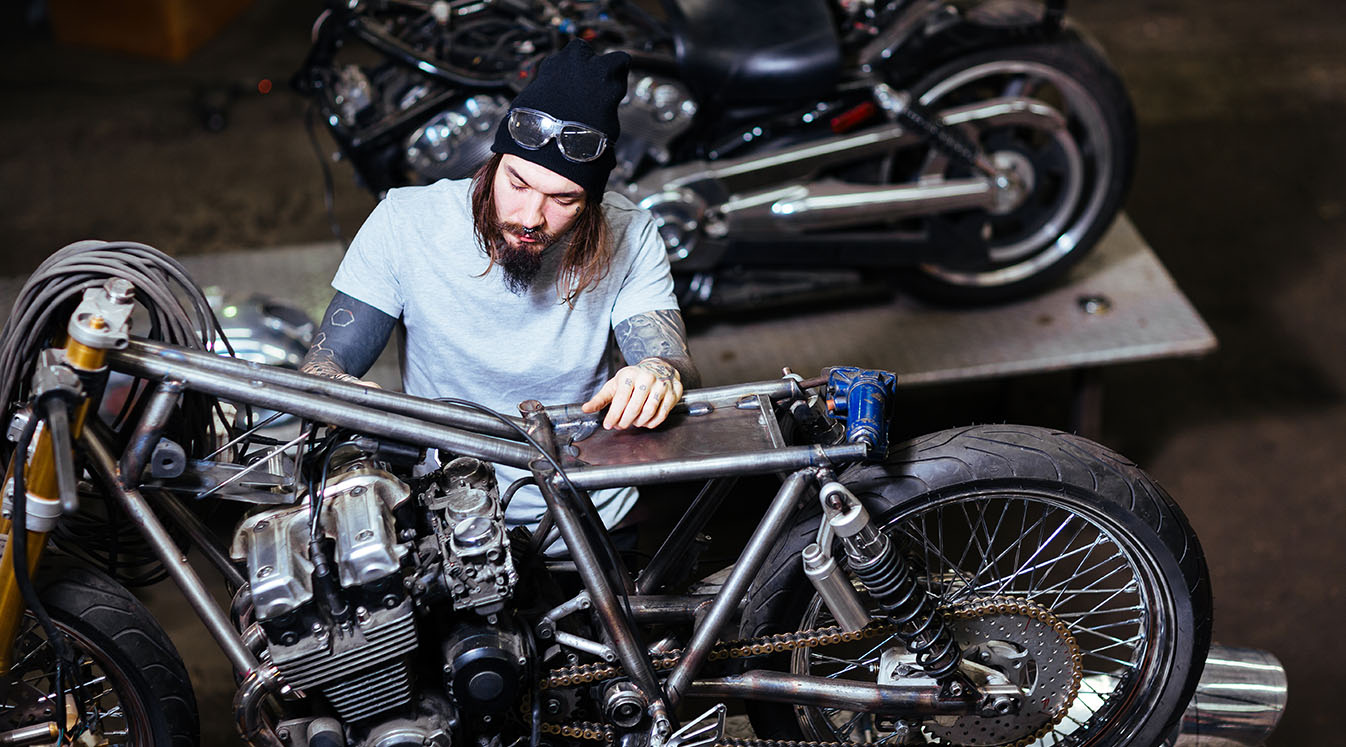 As the motorcycle evolved, so did the culture that came alongside it. Almost as soon as motorcycles first became widely available in the early 1900s, people were tuning them, racing them and riding them for pleasure. In 1924, the American Motorcyclist Association was formed.

Prominent manufacturers like Harley-Davidson created bikes that saw action on the battlefield in World Wars I and II. That meant that many Americans formed a close relationship with motorcycling that continued into the landscape of postwar America.

After WWII, veterans often formed motorcycle clubs to help them create social circles and readjust to civilian life. The image of motorcycle riders as rebellious outlaws began to imprint itself on public consciousness in the wake of the “Hollister riot” of 1947, as well as several popular motorcycle-centric counterculture films such as The Wild One and Easy Rider.

From there, motorcycle culture evolved in many directions. Some motorcycle organizations decided to focus on community service and activism, such as Bikers Against Child Abuse. Others became extremely tight-knit social clubs. Some even embraced the outlaw image.

Motorcycle clubs are some of the most important organizations in motorcycle culture. A real-deal MC is more than just riding buddies. It’s a chosen family and entering or leaving that family is a life-altering decision.

There’s also riding clubs, the more casual cousin of MCs. These clubs are designed as social organizations for people who like to ride together, chat via their motorcycle communication systems during a ride and hang out at the garage. Folks who aren’t keen on the commitment of an MC can make great new friends for riding by joining a riding club.

Of course, motorcycle clubs do have a dark side — the infamous outlaw biker gangs. But as any motorcyclist will be quick to remind you, 99 percent of motorcyclists are law-abiding people who just want to have a good time riding with friends and family (whether blood or chosen). Even the so-called “one-percenters” or “outlaw” clubs aren’t necessarily criminal organizations. They’re simply not sanctioned by the AMA and don’t have to follow its rules.

Rallies like Sturgis are a huge part of motorcycle culture for many riders.

Motorcycle rallies are foundational elements of American biker culture. At a rally, hundreds or even thousands of bikers from around the country come together to ride, make new friends and show off their bikes.

Bike rallies happen all across the U.S. throughout spring, summer and fall. The Sturgis rally in South Dakota and the Daytona Beach rally in Florida are two of the most famous, but dozens of smaller rallies happen just about everywhere else. You’ll find all kinds of bikers from all walks of life at these rallies, all coming to seek the experience of a lifetime.

Any subculture needs its distinctive fashion, and the motorcycling community has evolved a stylistic vocabulary all its own. The style as we know it today begins with Irving Schott, a New York native who created the first leather motorcycle jacket, the Schott Perfecto, in 1928. The sleek black leather garment soon became a staple of both riders’ and non-riders’ closets.

Today, motorcycle fashion is as diverse as the rest of the hobby. Some riders prefer high-tech synthetic gear designed for sport riding (and often paired with high-tech tools like Bluetooth motorcycle helmet speakers). Others like the classic look of a leather jacket, a cut vest and patches. What all true motorcycle gear has in common is that it’s designed for outdoor performance and rider safety.

Women have always been a part of the motorcycle hobby, but they haven’t always gotten the respect they deserve as riders. But many women who ride have never let sexist stereotypes stop them. In fact, the first women’s motorcycling club, called the Motor Maids, was founded all the way back in 1940 and is still in existence today.

Today, women are buying motorcycles in record numbers. Harley-Davidson and other big motorcycle brands have invested in creating resources for women motorcyclists that help make women feel safe and represented within the motorcycle community. And you’ll find a variety of motorcycle media for and by women now available, including podcasts and YouTube channels.

American motorcycle culture is alive and well, and like most subcultures, it’s quickly becoming more specialized and more diverse. In many ways, today and tomorrow’s motorcycle culture looks a lot different from the traditional motorcycle lifestyle. But in just as many aspects, modern bikers are also carrying on the most important traditions of life on two wheels.