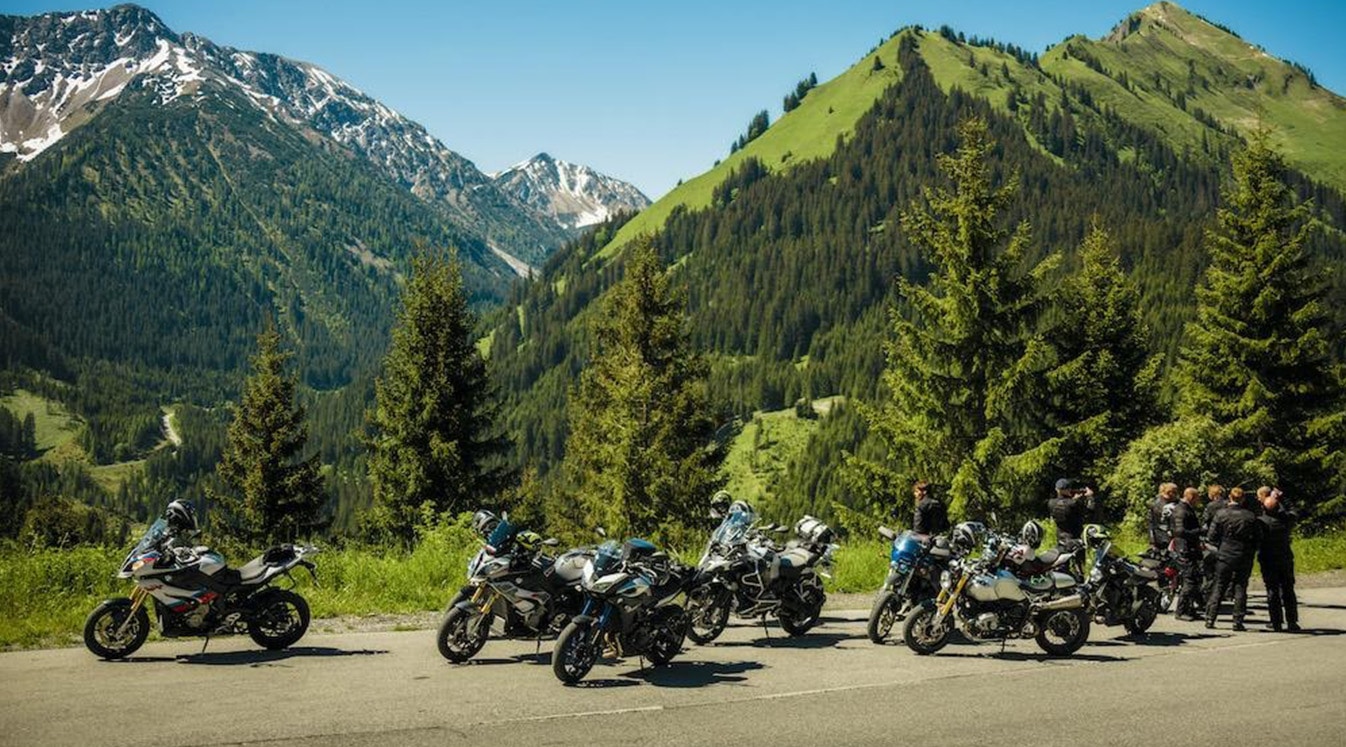 The good news is with a little bit of savings and a lot of planning, your dream of a motorcycle trip in Europe can be a reality! Europe has a long history of motorcycle culture, and it’s got some amazing sights to offer. What does it take to pull off an epic journey like this, and what challenges should an aspiring road tripper be ready to face? We cover everything from planning to licensing and regulations to even the advantages of traveling and riding alone or with a group.

Start with brainstorming on what you’d like to achieve on your European motorcycle trip. Ask yourself questions like:

-What attractions do I want to see?

-What events do I want to participate in?

-What countries and regions do I want to visit?

-How long do I want and can afford to travel for?

-How much time will I have during my trip?

Take some time to mull over your answers to these questions. When you’re ready to pull the trigger, book your dates and ask for time away from work as soon as you’re sure you can go. Not only will you save on airfare, you’ll also have a strong incentive to go through with the trip.

Another important choice to make when planning your trip is whether you’re going to ride solo or in a group. Advantages of going it alone include:

-You’ll never have to compromise on which countries to visit or attractions to see.

-There’s no worrying about group coordination and whether everyone is keeping up.

-Booking lodging will often be easier when rolling solo.

-You won’t come home with strained relationships if you don’t get along during the trip. That said, there are also advantages to a group ride, including:

-You’ll have someone to help if you get into trouble.

-You’ll have companions to share the fun experiences with and help ward off loneliness.

-You may be able to get cheaper group rates on tours and lodging.

For those doing group rides, staying in touch with the group during the ride is essential. You’ll be exploring unfamiliar roads all day, many of which will be narrower and have lower visibility distances than the roads in the U.S. So keeping in contact effortlessly is important.

The Cardo PACKTALK BOLD and Cardo PACKTALK SLIM give you the power of a dynamic motorcycle mesh network that works at distances of up to a mile and lets riders seamlessly drop in and out at any time. With their hands-free voice command operation, group riders can instantly access group intercom channels, phone calls and their favorite media. A pair of Bluetooth helmet speakers, like the Cardo JBL 45mm Audio Set, will upgrade the audio quality on the soundtrack to your European adventures.

Although possible with the right resources, having your own bike shipped to Europe and back can be expensive and raises the potential problem of non-compliant emissions standards. Many riders, who tour Europe by motorcycle, instead rent their bikes from one of the many companies which offer motorcycles to tourists. Again, renting as far as possible in advance will help you score better prices, and you’ll also probably have a better selection of bikes. Pro tip: if you rent with Hertz Ride, you can even rent a Cardo Systems communicator with your bike! (Only in select locations).

The most popular bikes for touring European roads are adventure bikes, but you can also find other types, like naked bikes, cruisers or touring bikes. Adventure bikes are a particularly great choice because they can traverse rougher backwoods that a normal motorcycle would have trouble with, opening up interesting new routes and attractions. Bigger, heavier bikes, like cruisers and touring bikes, are still present, but they’re not always well-suited for many of the smaller, older European roads. So be cautious of your decision as a larger bike might limit where you can go.

An international driving permit (IDP) is your best bet for a smooth ride in Europe. IDPs are internationally recognized by 174 countries, and it’s not difficult to get one. Just go to a AAA office, present your motorcycle license, fill out the application and pay a fee. It’s that easy and now you’re ready to ride! Just make sure your new international license is issued with a motorcycle endorsement.

Fortunately for Americans, the UK and Ireland are the only European countries that drive on the left so you won’t have to worry about everything being flip-flopped. That said, European roads still require some getting used to.

For one thing, roundabouts are everywhere in Europe, so get comfortable with navigating through them. They’re often much larger than American roundabouts, and some, like the Arc de Triomphe in Paris, have their own complicated rules. Lane changes are also more heavily regulated in many European countries, and you can be pulled over for riding continuously in the left lane or for passing on the right.

Additionally, be aware of where you can and can’t ride. Some European cities ban all motor vehicles in their city centers while other areas may allow motorcycles but not cars. And even if that sleepy medieval village you’re staying in does allow motorcycles, reconsider revving loudly at the crack of dawn. Common courtesy will take you a long way even if you don’t know the letter of the law where you’re staying.

Needless to say, you want to pack light. A good basic kit will include:

-Riding gear, such as a helmet, riding jacket and riding boots

-Comfortable casual clothing, including a good pair of walking shoes

-Survival essentials such as a first-aid kit and pocket knife

The key is to have a kit that’s compact enough to fit in your panniers and saddlebags. The lighter you travel, the less you’ll have to worry about storing and protecting your luggage and the better your bike will handle.

You can save a lot of money by staying in hostels rather than hotels as they’re much cheaper. Plus, hostels can offer a great opportunity to make new friends–they come in all shapes and sizes, including party hostels for those who want to live it up and quieter ones for those more interested in getting a good night sleep.

Motorcycle camping is another great option. It can be tons of fun if you’ve got a small tent or hammock; plus, it’s nice to save some money and get some fresh night air at the same time. But choose a campsite ahead of time. Don’t just throw up a tent on the side of the road. You also want to have a backup plan in case the weather isn’t cooperative.

The roads of Europe can take you thousands of different ways depending on where you want to go. However, there are some popular European motorcycle tour routes that offer views, food, history and pretty much anything else a rider could want:

–The Wild Atlantic Way (Ireland): Stretching all the way from Ulster in the North to Cork in the South, this 1,500-mile Irish coast road runs nearly the entire length of Ireland and provides an incredible ride full of charming small towns and dramatic cliffs rising from the sea. You’ll also spot several locations used for filming recent Star Wars films.

–Furka Pass (Switzerland): Ready for something a little more hair-raising? Furka Pass is a sliver of a road that passes through some of Switzerland’s mightiest mountains and glaciers. It’s narrow, packed with hairpin turns and has little to nothing in the way of guardrails—in other words, it might be just right. Bring a warm jacket!

–Iceland Ring Road (Iceland): Iceland’s volcanic activity makes it a heartbreakingly gorgeous country, and what’s more, you can traverse the whole thing in a few days. The Icelandic Ring Road allows you to do just that, with a course that allows tourists to easily take in many of Iceland’s major attractions. For those willing to go a little off the beaten path, a huge variety of world-class hiking trails are just an hour or two away from the ring road.

–Cabo de Gata to Granada (Spain): Spain features a head-spinning variety of scenery, and this ride in the Andalusia region will show you some of its best. This route starts in the arid volcanic cliffs of the Cabo de Gata National Park and winds its way up to the city of Granada where you’ll find not only the legendary Alhambra Palace but also the beautiful Sierra Nevada mountains.

–Transfagarasan Highway (Romania): Eastern Europe doesn’t get enough credit for its incredible scenery, but one trip down the Transfagarasan Highway (featured on the BBC’s Top Gear) will make you see the light. This twisty highway winds its way through the Southern Carpathian Mountains, climbing up to over 6,500 feet in elevation, and the journey is packed with amazing lodges and guest houses where you’ll find delicious local cooking.

Verdon Gorge (France): One of Europe’s most popular spots for motorcycle touring, the Verdon Gorge is France’s answer to the Grand Canyon. And the roads that surround it are no joke, with steep, twisty turns that will give even seasoned riders a challenge. Head up early in the morning to beat the crowds that flock to it, especially during the summer.

Some of these routes are long enough for a tour of their own while others are relatively short and can be strung together into a longer tour. They also offer a wealth of opportunities for independent exploration, making them awesome routes whether you’re using a guide or not.

Here are a few key things to remember that will help save you time and money as well as keep you and your friends safe:

-Explore local street food options for a tasty and authentic meal that will also save you some coin.

-If you use your phone for navigation, make sure that you bring a handlebar clip for it and get a European SIM card to power your phone.

-Build some flexibility into your itinerary and give yourself time to roam. Part of what’s awesome about exploring Europe is finding the hidden gems, like out-of-the-way cafés and small towns with unique histories.

-Remember that Europe has lower blood alcohol content limits for intoxicated driving. In many European countries, it’s just 0.05 which you might hit from having a single strong drink. Since even one drink impairs your ability to ride safely, the best bet is to simply avoid mixing motorcycles and booze at all.

-Take the time to learn a little bit about the history and culture of each place that you visit. Not only will it give you a better appreciation of your environment, it can help you avoid embarrassment and understand local customs better.

-We can’t stress enough how important it is to be aware of pavement conditions at all times. Europe is full of ancient roads made out of brick, cobblestone and many other old-school building materials which are likely to be extremely bumpy and require special care to avoid a wipeout (if you ride them at all).

Europe from the back of a motorbike is an experience unlike any other. So, if you’re going to do it, you owe it to yourself and your companions to do it right. Pack smart, practice your riding skills and make plans—but leave a little room for the magic of the road to happen.