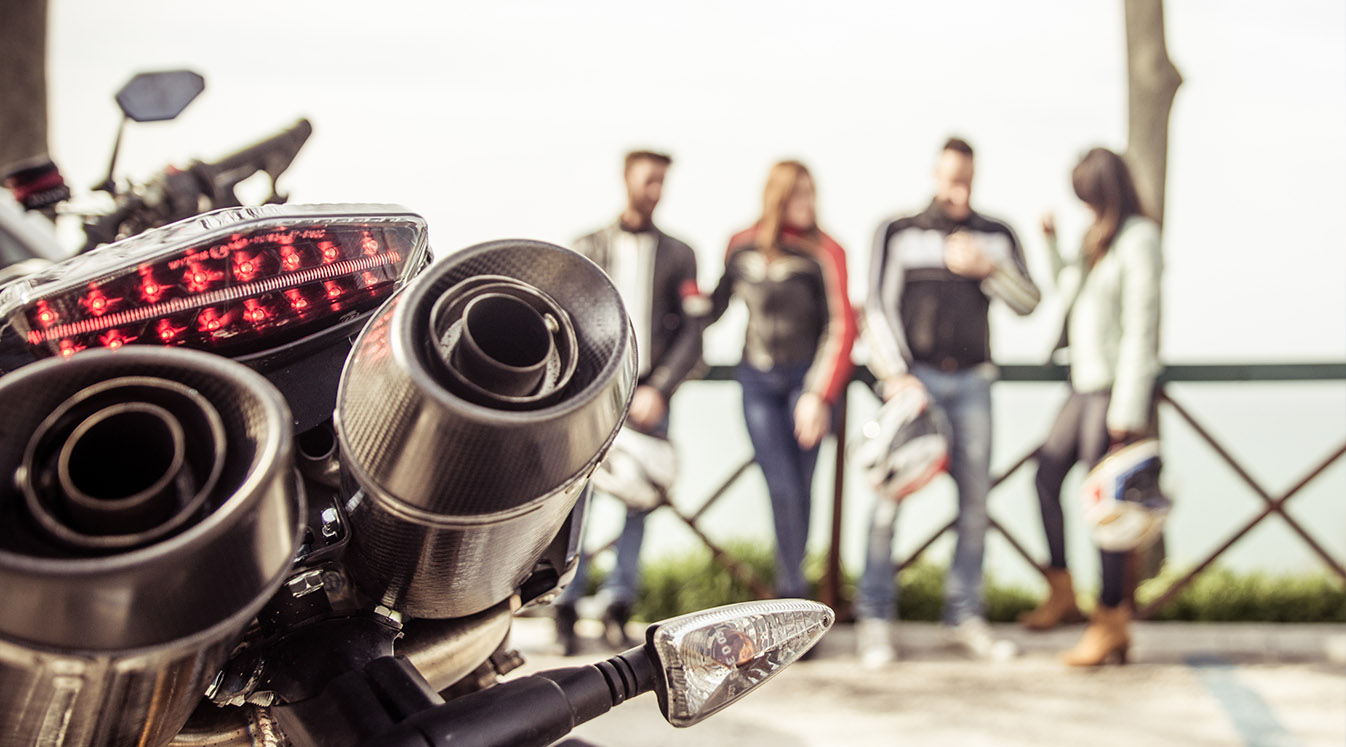 Relax—motorcycle culture has had over a hundred years to develop its own vocabulary, and you don’t have to learn everything in an evening. Use this dictionary of motorcycle slang to learn the crucial terms that will help you join the conversation.

(Note: This dictionary focuses on slang terms, rather than the basics of motorcycle operation. If you’re brand new to motorcycles and don’t know a clutch from a foot peg, it’s better to start with an educational resource like a Basic Rider Course from the Motorcycle Safety Foundation.) Adventure Bike/ADV Bike: A type of motorcycle that’s designed to handle a wide variety of road types, including dirt and gravel, without sacrificing performance on pavement. To accomplish this, adventure bikes use design elements from dirt bikes, such as high suspensions and knobby tires.

Ape Hangers: An extremely tall style of motorcycle handlebars associated with cruiser bikes. Necessary on some types of hardtails because the rider has to physically pull themselves out of the seat when going over bumps, but serve a purely decorative purpose on any other kind of motorcycle.

ATGATT: “All the gear, all the time.” A common saying among motorcyclists that emphasizes the importance of riding with the right gear. A helmet is the minimum legal requirement in most states, but wearing the complete package of gloves, jacket, riding pants and boots will help save your skin in a crash.

Bagger: A touring motorcycle, originating from the numerous saddlebags associated with these models.

Biker: A slightly tricky term—members of the general public often use it to refer to any person who rides a motorcycle. But among motorcyclists, it often means someone who’s in an MC, or possibly even a one percenter.

Bobber: A style of cruiser or standard motorcycle characterized by removal or shortening of the fenders. Originally a style of bike customization, bobbers have been added to production lineups by several large motorcycle manufacturers such as Indian.

Boxer: A type of motorcycle engine with horizontally opposed pistons, so called because the reciprocating motion of the engine resembles a boxer’s fists. Boxer engines are known for their even weight distribution, which gives the bike exceptional stability and cornering ability. However, they’re also easy to damage in a crash. Also known as a flat-twin engine.

Cafe Racer: A stripped-down motorcycle with classic styling and forward-leaning position, designed for nimble riding in cities. So called because of their origin in European motorsport culture, where riders would race these small, sleek bikes from one cafe to the next.

cc: Cubic centimeters, the metric used to measure the size and displacement of most motorcycle engines.

Chopper: A heavily modified style of cruiser that originated on the West Coast in the mid-20th century. Often feature extremely elongated front ends, tall ape hangers, high sissy bars, outrageous decorations, large front wheels and other elaborate modifications. So called because they were often “chopped” together out of other bike parts. A chopper motorcycle, decked out and ready to rumble.

Cruiser: A classic style of motorcycle, typified by many Harley-Davidson models, that features a low, slightly elongated design and a laid-back rider position. Associated with hallmarks of biker culture such as Easy Rider and Sturgis.

Dropping: When a rider allows their motorcycle to fall over while it’s not moving. Most riders, no matter what they tell you, have dropped a bike at least once in their riding career, and probably more than that. Drops often happen in situations like backing into a parking space, getting gas or cleaning the bike. Often, a drop won’t hurt anything or the damage will only be cosmetic—but the bike should still get a mechanical checkup just to be safe.

Fairing: The assembly of windscreen and plastic parts attached to the front of some types of bikes. A fairing helps make the bike aerodynamic, which is why you’ll often find them on styles such as sport and touring motorcycles.

Hardtail: An older style of motorcycle that has no rear suspension system. Once common, hardtails are now considered specialty motorcycles that aren’t recommended for beginners. Their lack of rear suspension can make for an extremely rough ride, so it’s important to choose a decently smooth road when riding one.

High-Side: A type of crash in which a motorcycle tosses the rider through the air over the bike. Caused by a bike’s rear wheel slipping out of traction and then suddenly regaining it, rocking the bike violently and flinging the rider away. A high-side crash often results in serious injuries for the rider.

Hog: A Harley-Davidson cruiser motorcycle. Typically applied to the larger and heavier end of the Harley lineup.

Inline: A type of motorcycle engine with all of the engine cylinders aligned in a single row. Typically associated with sport bikes, which use an inline’s beefy torque to produce their crazy acceleration. Subtypes include an inline four, inline triple and inline six.

Intercom: A motorcycle communication system used to communicate while you’re on the road. Today’s best motorcycle intercoms, like the Cardo Packtalk Bold, offer both direct communication with your fellow riders and the ability to answer phone calls and stream media hands-free while out and about.

Low-Side: A type of crash in which the motorcycle slides out and hits the ground toward the inner edge of a corner. Usually, this will result in the rider sliding along the ground with the bike, rather than being flung away from it. Low-sides are generally less dangerous than high-sides, but they can still cause severe injuries, particularly if part of the rider’s body gets trapped under the bike or the rider isn’t wearing a full-face helmet.

Motorcycle Club (MC): A fraternal organization based around motorcycle riding that has a strong hierarchical structure and close social relationships. Usually requires a lifetime commitment and the regular payment of dues. MCs often hold events such as rallies or charity rides, and many are involved in service work in their communities. Note that the great majority of people in MCs are not one percenters.

One Percenter: A member of an outlaw MC like the Bandidos or Hells Angels. So named because they represent a small fraction of the world’s motorcyclists. One percenters almost always wear three-piece patches and take their commitment to their clubs very seriously. Among people who are actually in an outlaw MC, “one percenter” isn’t always considered an insult—but it probably depends on who’s saying it.

Pillion: A passenger riding on the back seat of a motorcycle. A motorcycle’s rear passenger seat is called the pillion seat.

Pipes: A motorcycle’s exhaust. Sometimes engineered to be louder than it would otherwise be.

Poker Run: A special kind of rally where participants receive a playing card at every stop along the route. At the end, the rider with the best poker hand wins a prize.

Rally: A social gathering for motorcycle riders. Most rallies will include rides through local scenic areas, plus cool extras like bike shows and general socializing.

Rider: Any person who rides a motorcycle. A more neutral term that doesn’t come with the cultural connotations of referring to someone as a biker.

Ride Your Own Ride: A common adage among motorcycle riders that means you should avoid comparing yourself and your bike to other riders and their bikes. Don’t try to race that stranger down the straightaway, and don’t try to keep up with someone who’s on a much faster bike than you are—just enjoy the pleasure and freedom of riding your own bike at your own skill level.

Riding Club: A motorcycle-based social group that’s devoted mostly to riding, talking about and/or working on bikes in a casual atmosphere. Contrast with the extremely tight-knit dynamics, hierarchical structures and lifetime commitment of a motorcycle club.

Road Rash: The extremely painful abrasion that results when your skin hits the pavement in a crash. Riding ATGATT is the best way to prevent road rash.

Sissy Bar: A back rest for the seat on a motorcycle. Most of the time, people aren’t using this term to insult someone—that’s just what this particular piece of gear has come to be called.

Slicks: A type of motorcycle tire designed for racing. Slicks get their name from the fact that they have no or very little tread pattern. That “slick” design can improve speed and handling, but it also makes them not street legal.

Softail: A type of motorcycle with a rear suspension, exemplified by its originator, the Harley-Davidson Softail. When Harley introduced the Softail in 1984, it popularized bikes with rear suspensions hidden by the body of the bike, and Harley still uses the Softail chassis in many of its cruisers. However, cruisers like the Kawasaki Vulcan and Honda Shadow are also often called softails because they use a similar suspension and body style.

Squid: A derogatory term for an overly-cocky rider. Specifically applied to riders who flaunt their lack of protective gear and/or try to ride far above their skill level to maintain an image.

Standard: A popular type of motorcycle with a slimmed-down profile thanks to its lack of a fairing and its small fenders. Available in a wide range of aesthetic styles, from vintage styles modeled after cruisers and cafe racers to more modern styles similar to a more minimalist sport bike. Also known as naked bikes or streetfighters.

Sturgis: The Sturgis Motorcycle Rally in Sturgis, South Dakota. One of America’s largest and most legendary motorcycle rallies, with hundreds of thousands of riders attending every year. Primarily focused on Harleys and other cruisers, but features bikes (and riders) of all kinds.

Tank-Slapper: A sudden and extremely dangerous oscillation of the handlebars back and forth at high speed, so called because they sometimes move so violently that they strike the gas tank. Occurs when the front wheel loses traction, causing the bike to try to “buck” the rider off. Can be caused by a problem with the bike or by an operator error. Also known as a shimmy or death wobble.

Touring: A large type of motorcycle made for long-distance rides. Typically packs a large engine and an even larger body, as well as comfortable seats and storage space such as built-in panniers. Also, a verb that refers to the thing you do on a touring bike—taking a road trip on your bike.

Twisties: Curvy roads that are lots of fun for skilled riders. Some twisties, like the Tail of the Dragon, are so famous among riders that people come from all around the country (and the world) to ride them. Also known as hairpins.

V-Twin: A style of motorcycle engine associated with cruiser motorcycles. Harley-Davidson is by far the most well-known maker of V-Twin engines and, in fact, the Twin is the primary engine style that Harley offers.

Now that you know the key terms of the motorcycle world, you need a way to shoot the breeze with your buddies when you’re riding. The Cardo Packtalk Bold is the perfect answer: a rugged motorcycle helmet intercom with crystal-clear sound from a pair of JBL motorcycle speakers and groundbreaking dynamic mesh helmet communication technology. Take one on your next ride and find out what you’ve been missing!